In this Sunday’s Wall Street Journal I’ve got a  long review of A. Scott Berg’s new biography Wilson. It’s also an essay on what exactly a biographer adds to any biography. Just four years ago, another excellent biography of Wilson  appeared — John Milton Cooper Jr.’s Woodrow Wilson — and that means we’ve got an excellent test case for just how two different biographers create two different versions of Wilson.

Anyway, read the review for more. One of my main points is that Berg tries too hard to fashion Wilson as a president who feels distinctly modern. Don’t just take my word for it, though. Here’s Berg talking to to Los Angeles magazine: “As I was writing,” he said, “there were literally days I would say, ‘I’m going to forget the name is Wilson. I’ll pretend it is Obama. And I will write it as though it is Obama.'”

Berg’s an excellent biographer. (Last month, in a separate review, I praised his decades-old book on Max Perkins.) But this method strikes me as problematic, to say the least. Cooper is also an excellent biographer, and I think his book is a better fit for anyone new to Wilson. But Berg’s scrupulous research — he spent a decade on Wilson — has unearthed lots of new supplementary detail, and for experts it’s worth checking out, as well.

One last thing: not many people know that Sigmund Freud cowrote a biography of Wilson with William Bullitt. It’s called Thomas Woodrow Wilson: Twenty-eighth President of the United States, A Psychological Study, and it’s really, really awful. Freud’s estate worked very hard to separate Sigmund from it, and a lot of historians still seem dubious about his involvement. But in 2008 J. F. Campbell published a scholarly article based on his research in Bullitt’s papers. It turns out Freud more than earned his status as co-writer, and more scholars should check out Campbell’s work.

For their December 1990 issue, the editors of The American Spectator did the same thing they’d done every year since 1976: they asked a few famous writers, academics, and political types to provide book recommendations for the holiday shopping season.

One recommender in that 1990 issue was former First Lady Nancy Reagan. She spoke highly of two books by Rosamund Pincher (The Shell Seekers and September), one book by Mark Twain (Adventures of Huckleberry Finn) — and one book each by Ronald and Nancy Reagan.

Here, from the Spectator‘s archives, is Nancy’s rationale on those last two:

An American Life, by Ronald Reagan. The fascinating story of a young boy from Dixon, Illinois, who worked for a construction company as an 11-12 year old for 25 cents an hour; at fifteen he became a lifeguard to help work his way through college; in college he worked to pay his way, and afterwards finally landed a job as a sports announcer in Iowa. He then became a star in movies, the Governor of California for eight years, and finally President of the United States for eight years. Incredible story.

My Turn, by Nancy Reagan. An honest book answering all the charges that had been made against her for eight years and she didn’t feel she could answer at the time; a picture of what life was like at the White House and her relationship with her husband.

I’m a little late in linking to this, but I wrote another story for the Boston Globe‘s Ideas section — this one on the crazy, opulent history of deluxe presidential memoirs, books that typically come with autographs, artificially limited print runs, and price tags as high as $1,500.

Along with my text, you’ll find some great photos from Jim Hier, a Portland man who works in finance — and who owns more than 400 different volumes autographed by presidents. Hier filled me in on the rise of presidential book collecting, and, while there wasn’t room for that in the story, I’ll sketch it here.

Nineteenth-century autograph hounds lusted after George Washington’s signature, so there is a history here. Still, for most of that history, collectors didn’t care about an autograph’s context. Hier remembers that, for a long time, books with presidential autographs actually came cheaper than letters or random squibs. “A lot of dealers looked at books as a bit of a nuisance,” he told me. “They were bulky, heavy, and hard to transport. One time, I got Eisenhower’s two-volume set at the end of a show for a big discount, just because the dealer just didn’t want to pack it home.”

Two things changed this. First, in 1982, Stephen Koschal published a book titled Collecting Books and Pamphlets Signed by the Presidents of the United States. It helped focus and drive the interests of collectors like Hier. The second change was the Internet, and websites like eBay and AbeBooks helped Koschal’s readers connect with each other. Rare and autographed presidential books still make up a small part of the book collecting universe, but Hier says interest (and prices) have grown substantially. In the 1970s and 1980s, Hier found new items all the time. “Now, I’m lucky if I can add one or two good books a year.”

That’s partly because Hier already owns so many amazing titles. (In addition to the mass produced books I talk about in my story, Hier owns unique books like a copy of Benjamin Henry Harrison’s This Country of Ours that the president signed for his wife.) But that’s also because, today, Hier has plenty of company.

Earlier this week, we put to rest one of the right wing’s more durable political myths. To celebrate the occasion — and to remind us that these myths can be big or small and can originate on the right or the left — I’d like to return to a idiotic mini-scandal from last year. Let me say upfront that everyone has moved on and no real harm was done. Still, the procedures and incentives that created this kind of nonsense still hold, and we’ll see many more stories following this template in the next 18 months.

Anyway: in November of 2010, Barack Obama published a children’s book, Of Thee I Sing. It was the latest in a long line of presidential children’s books — see other entries by Theodore Roosevelt, JFK, Jimmy Carter, Hillary Clinton, and Laura and Jenna Bush — and an even longer line of celebrity-written children’s books. (Whether celebrity book vs. presidential book remains a useful distinction is a topic for another post.)

Nevertheless, in the days surrounding its release, Of Thee I Sing set off a series of controversies. The first  — doesn’t Obama have something better to do than write a children’s book? — was quickly defused by his publisher and his agent: he wrote the book after the election but before the inauguration, and the illustrations caused the delay. The second controversy — is Obama cashing in on his presidency? — was never more than notional. Of Thee I Sing sold 50,000 copies in its first week, but, as the AP reported, Obama donated “his proceeds to a scholarship fund for children of disabled and fallen soldiers.”[1]

The book’s third controversy, however, could not be so easily dismissed. When Fox Nation linked to a USA Today story about Of Thee I Sing, it added its own headline: “Obama Praises Indian Chief Who Killed U.S. General.” (Sitting Bull is one of the 13 figures Obama profiles in the book.) Over the next 48 hours, the online world’s usual suspects — media critics, aggregators, pundits, Gawker — came together to criticize Fox News for its hyper-partisan behavior. AOL’s Politics Daily commissioned a 1,000 word feature, complete with expert interviews and a larger import.

But here’s the thing: the only glimmer of conservative outrage came in that first headline, which Fox Nation quickly changed “for historical accuracy.” (The afore-linked stories also included a few online comments, sure, but the journalistic habit of quoting online commenters is its own sick joke.) This story lived and died on the left; the right never even noticed. The whole mess underlines the fact that attacking everything Fox News does is now as ingrained as Fox News attacking everything Obama does. Another way to say this is that Fox News wasn’t the only media outlet willing the Of Thee I Sing controversy into being. I’m not sure who won the day, but we all lost it.

[1] This probably isn’t the full truth. Of Thee I Sing was the last in a three-book, $1.9 million deal Obama signed with Knopf in 2004 — the publisher had originally promised this book would be the childhood autobiography of a “skinny young kid with big ears and the funny name” — but I never saw anyone ask if the “proceeds” include part of his advance.

I’m switching gears to work on some long-term projects, which may mean fewer story links and deleted scenes. That said, I want to keep writing regularly, so the plan is to do more short, standalone posts. They might be a little dated, but I hope they’ll also be interesting. Expect lots of presidents, publishing history, and weird-slash-strangely familiar stuff from old media sources.

So, in that spirit: while researching Jack Cashill’s crackpot theories about the real author of Barack Obama’s books, I came across the following web ad: 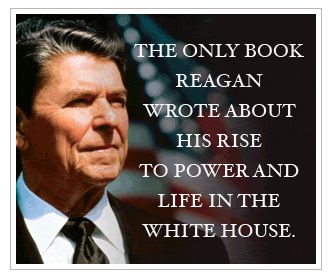 It seems that, in honor of Reagan’s birth centennial, Simon & Schuster has decided to reissue An American Life, his presidential memoir, in hardcover. Immediately after his death, in 2004, the publisher also rushed out a fresh batch of 10,000 copies. But this is something new. First, there’s the targeted online ad campaign. (I saw this one here.) Then there’s the brand new online book trailer. “Thousands of books have been written about Ronald Reagan’s presidency,” the trailer opens. “Only one in his own words.”

Most interesting of all, though, is Simon & Schuster’s release of a new “enhanced ebook” that combines Reagan’s text with contemporary videos. It’s a smart and relatively easy move since Simon & Schuster is now owned by the CBS Corporation, which of course owns all the news footage one would ever need. But political books often end up in these sorts of multimedia experiments. Rick Perlstein’s Nixonland was Simon & Schuster’s first “enhanced ebook,” with 27 videos interpolated into the almost 900 pages of text. Sarah Palin and Ted Kennedy’s plain old ebooks became important data points in the publishing industry’s attempts to delay ebooks in order to goose hardcover sales. And way back in 1990, for its original release, Reagan’s An American Life became the first presidential memoir audio book.

In a forthcoming academic article, I’ve got a lot more to say about Reagan’s career as an author, which is much more interesting — and much more rewarding — than you might initially think. I’ll post a .pdf of it when the journal issue comes out. Let’s hope that happens in 2011, so we can keep riding the birth centennial wave.